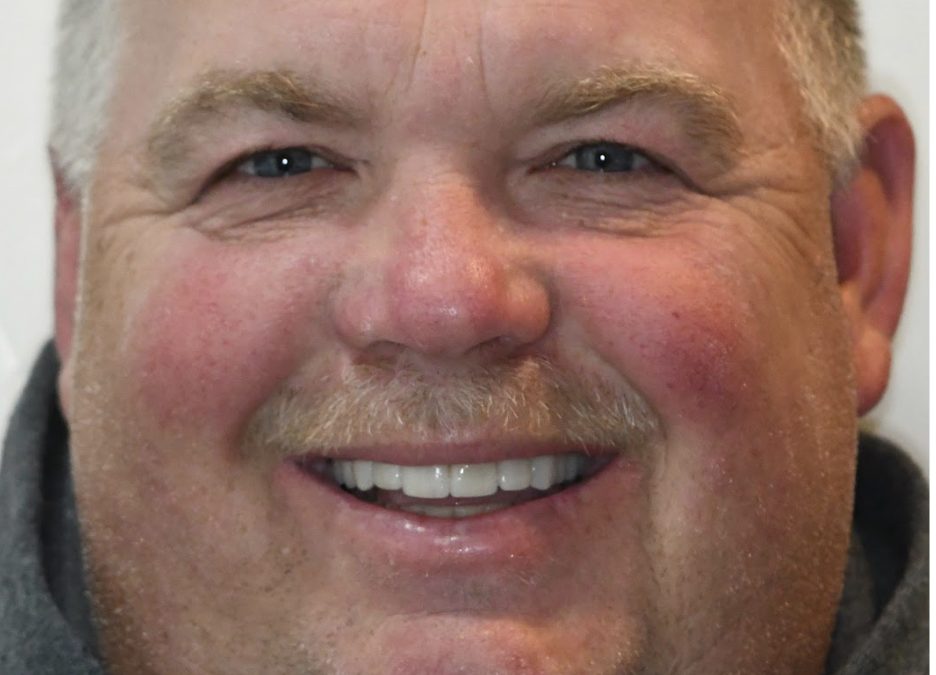 We are honored to have been asked to donate laboratory services to a most deserving individual.

Opus One Laboratories has built its reputation on its expertise in handling large reconstruction cases and complex cosmetic cases.  We have been changing people’s lives since 2000.  We were honored to be asked to participate in the Smiles for America program and help give a very deserving person a new smile.

We were asked to help Mr. John Warn, who served in the United States military for six years.  He served in Desert Storm and served as a military police officer while in the army.   After his military service, Mr. Warn became a deputy for the Macomb County Sheriff’s Department.  He volunteers as a firefighter for the city of Richmond, was voted in as a member of the City Council, and is a board member on the Richmond Good Old Days Festival Committee. After all, he has given to this country and to his community, we were excited to be able to participate in restoring his smile.

According to John, it was his time spent serving in Desert Storm where he began to see his mouth deteriorate.  He presented with plaque build-up, several areas of decay, composite patchwork in several places, and a diastema between 8 and 9.  #7 was lost during his time serving in the military.  There was a significant space issue between 6 and 8 when compared to the space between 9 and 11, making this case an esthetic challenge. 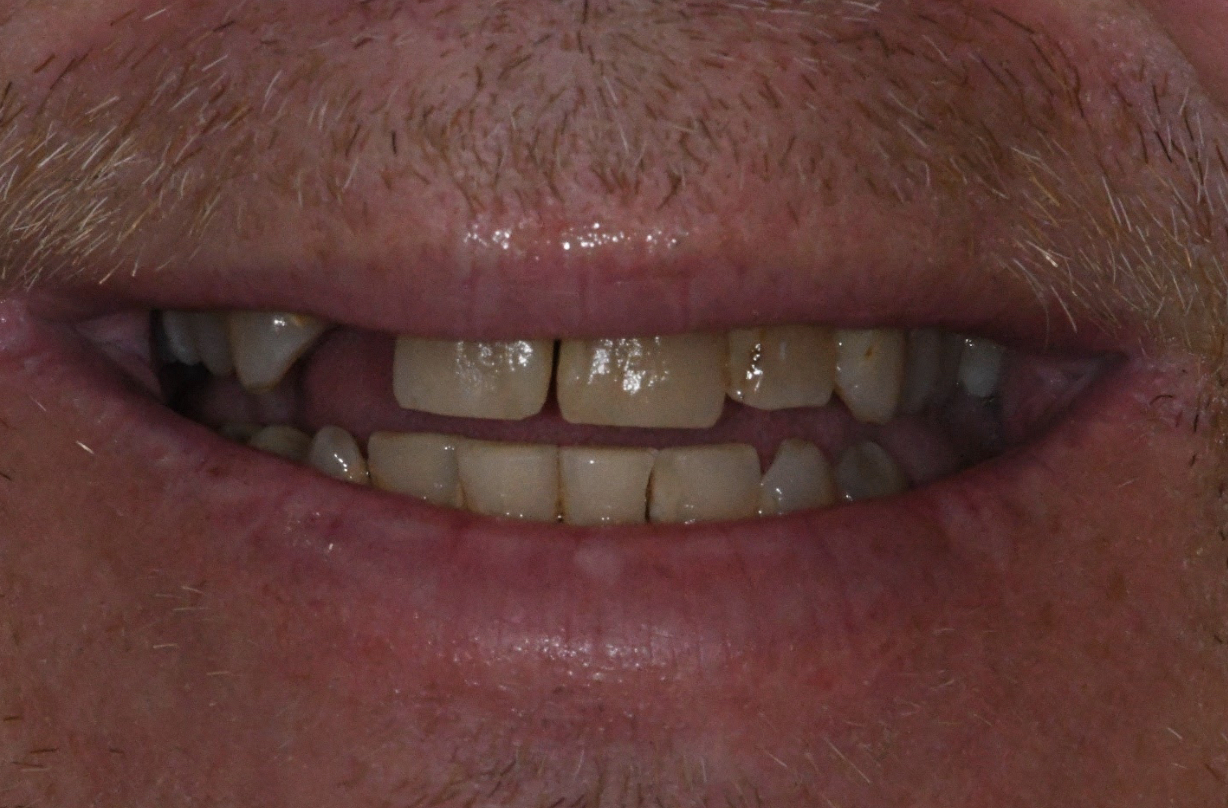 We began this case with a diagnostic wax-up on teeth 3-14.  In a case like this, a diagnostic wax-up is an important step in determining the final design.  It also provides a test run for the patient in the form of temporaries.  It is advisable to let the patient wear the temporaries made from the wax-up so that they can evaluate and get feedback from friends and family before the finals are completed.  If significant changes are needed, it might be wise to adjust the wax-up and create a new siltex for temporaries until the patient is satisfied.  A diagnostic wax helps to determine the following:

With John’s case, one of the challenges was the spacing between 6 and 8. Through the wax-up process, we worked out the ideal width design of each tooth to create a natural overall outcome and closer balance of dentition sizing.

In addition, while evaluating the photos, it was determined that the patient does not show any dentition while in repose position  When considering facial esthetics, incisal tooth exposure in a resting position can give a patient a more youthful appearance.

Click here to read more about how to determine the length of the centrals when little or no tooth exposure is present in the repose position. 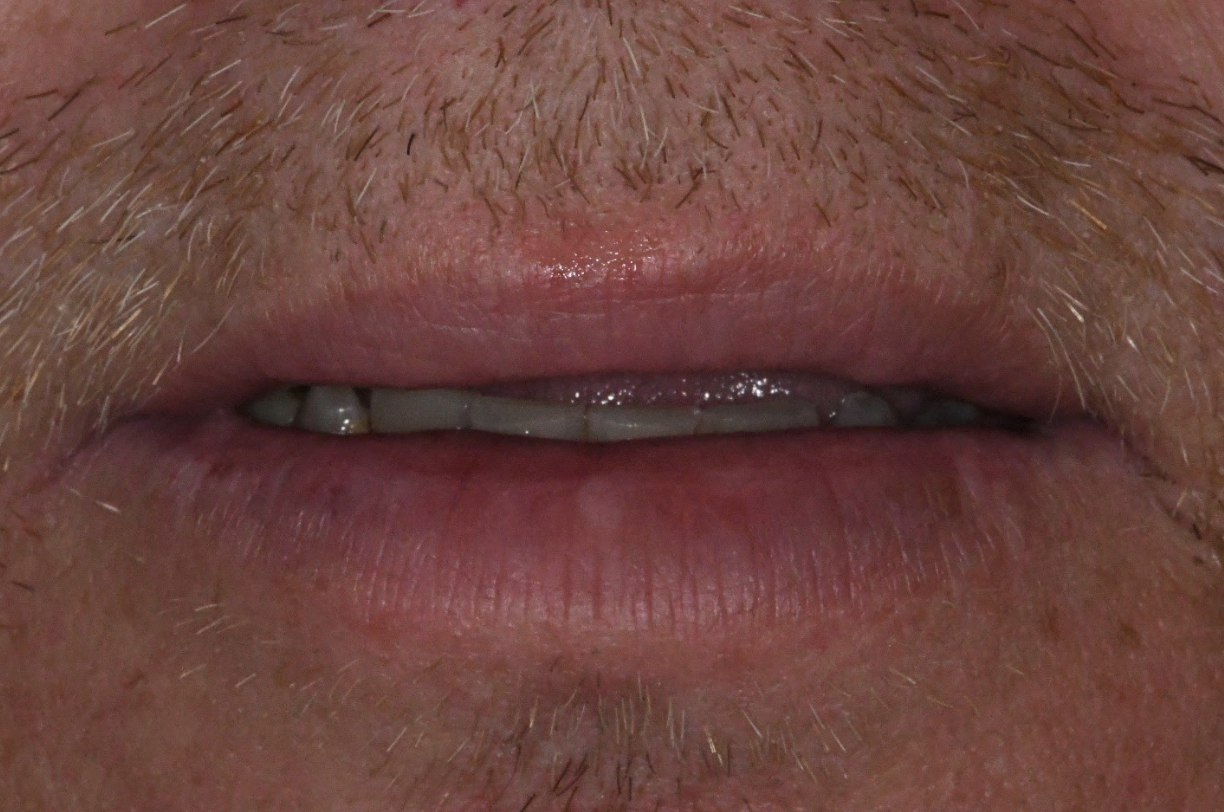 In this case, the patient needed to add a bit more length than the wax-up provided, and this change was incorporated into his temporaries.  Once the patient agreed to the proposed treatment, the teeth were prepared, and traditional impressions were taken. Opus One Laboratories then received the following to complete the case.

The model work was processed, and the case carefully mounted with the enclosed bites and Kois Facial Analyzer.  The Kois Dento-Facial Analyzer is a tool that captures a patient’s occlusal plane in three planes of space. It does this with a vertical rod that captures the facial midline; the horizontal part of the analyzer picks up the occlusal/horizontal plane, and finally, the average axis-incisal distance of 100mm captures the frontal plane.  This tool is simple to use but offers such a huge advantage to getting the horizontal and the midline right. 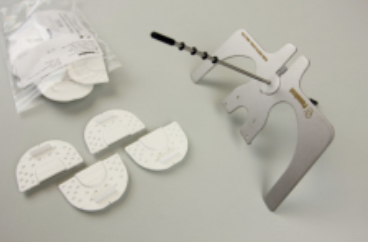 The patient had a chance to test-drive his new smile with the temporaries that were fabricated from the diagnostic wax-up.  During this time, it was determined that the teeth needed to be slightly longer.  This adjustment was made to the temporaries.  An impression of this change was captured, and this is the template that was used to make the final restorations.

It was decided to use pressed e.max to restore this case.  E.max offers both durability and esthetics.  It is one of the most prescribed restorative materials on the market and has exceptional clinical success. 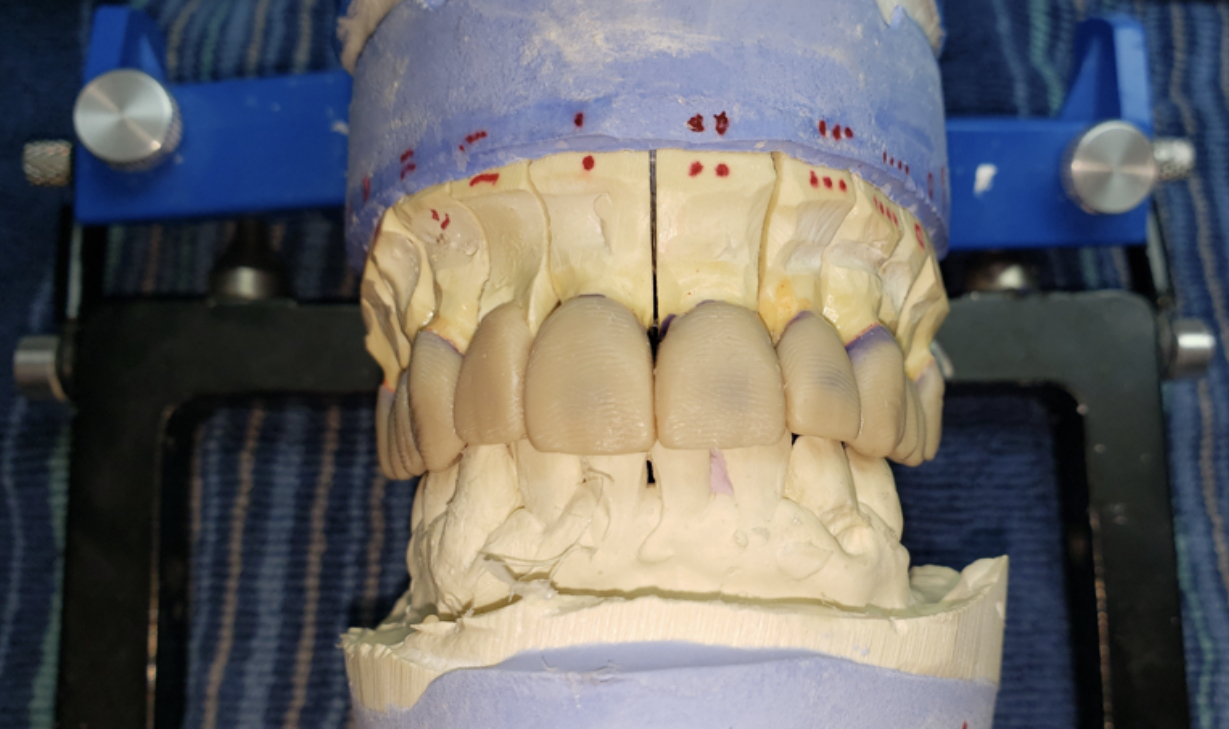 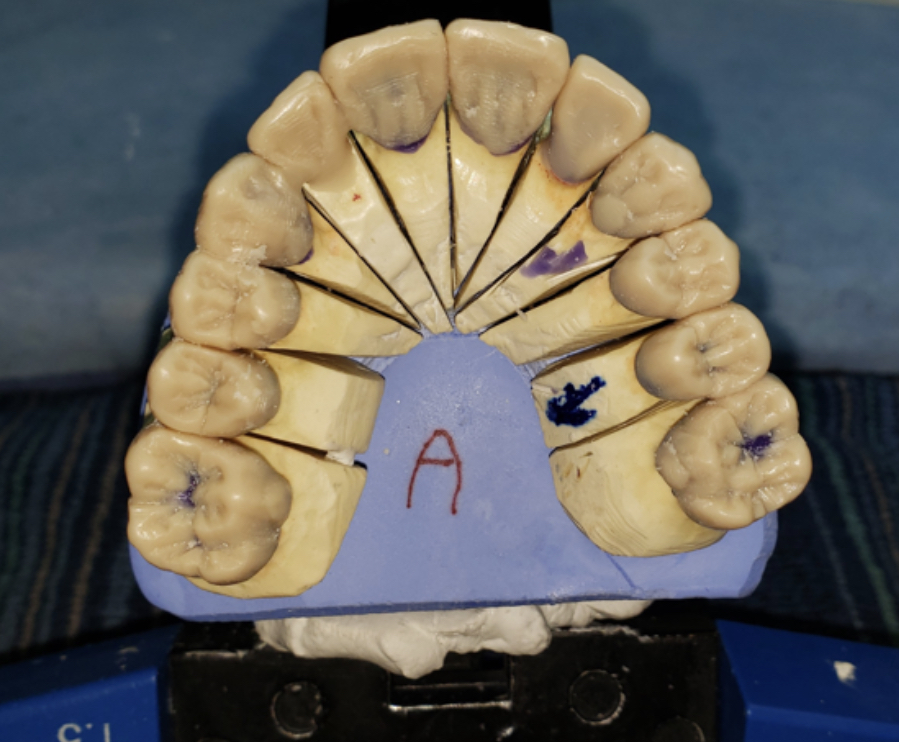 The case was then pressed, in the final shade requested  a B1.  We used Hilla I10 for the characterization level.  Final adjustments were made, and the case was stained and glazed for an excellent result and huge improvement to the patient’s smile and function ability. 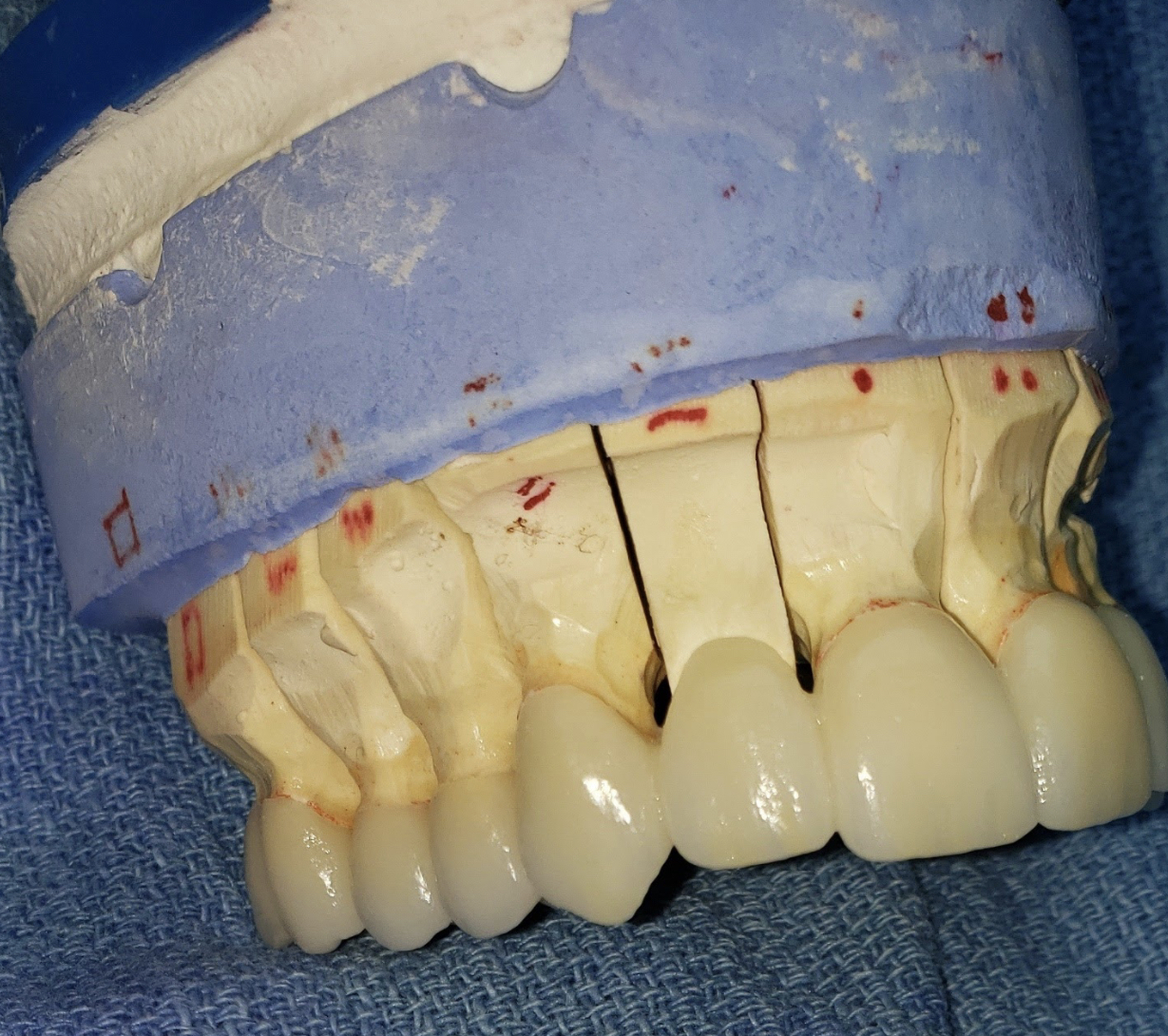 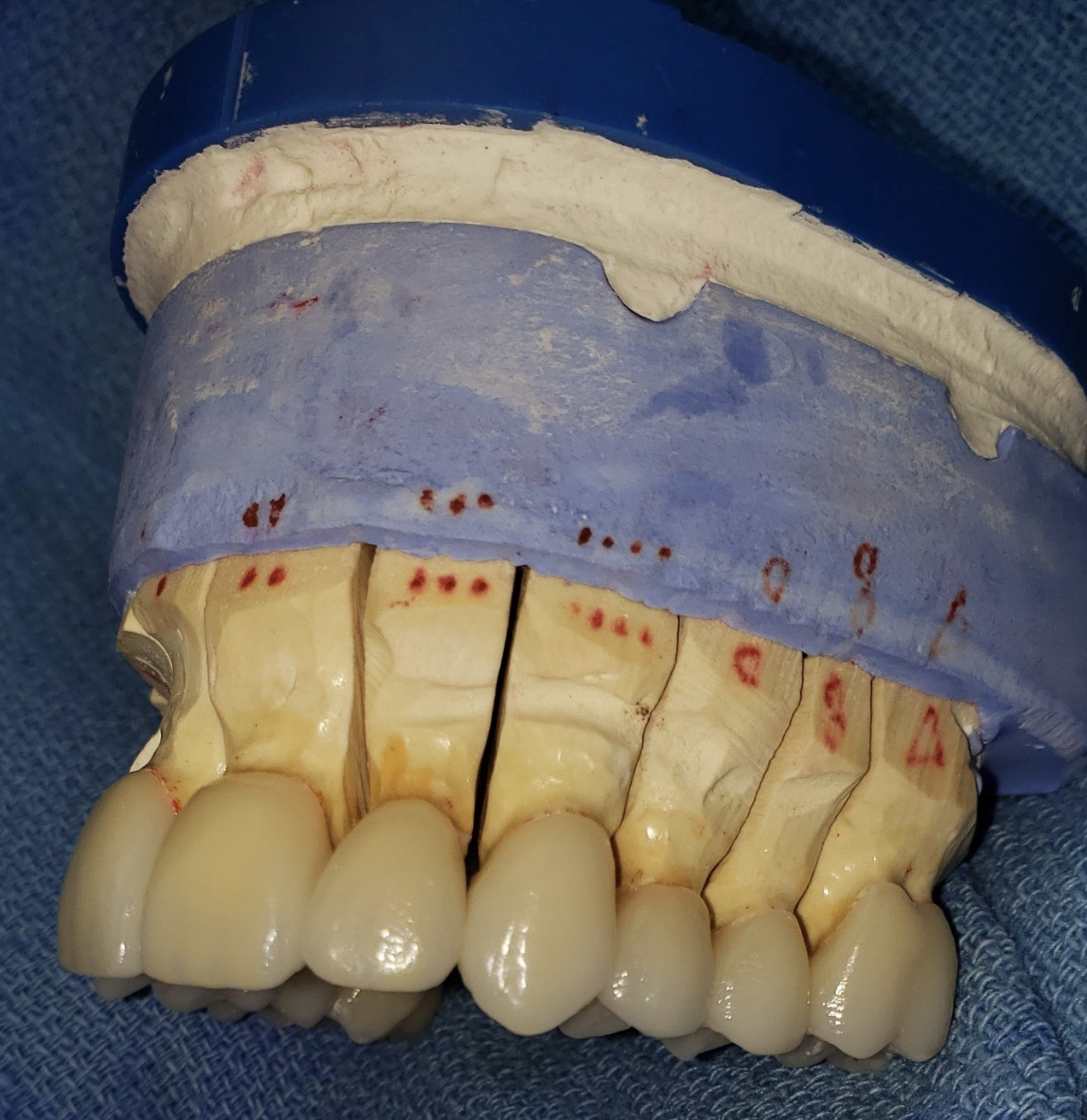 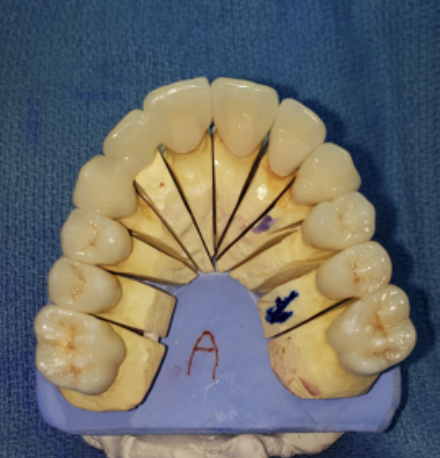 Whether Opus One Laboratories is working on a single unit or a full mouth rehabilitation, every case is treated at the highest possible level to achieve excellent results for the patient.  While every case is important, occasionally, we are given the opportunity to work on cases that have special meaning.  We often say to those that serve in our military, “Thank you for your service.” It was nice to be able to do something a little more significant than saying Thank you.  John, we sincerely hope you enjoy your new smile. 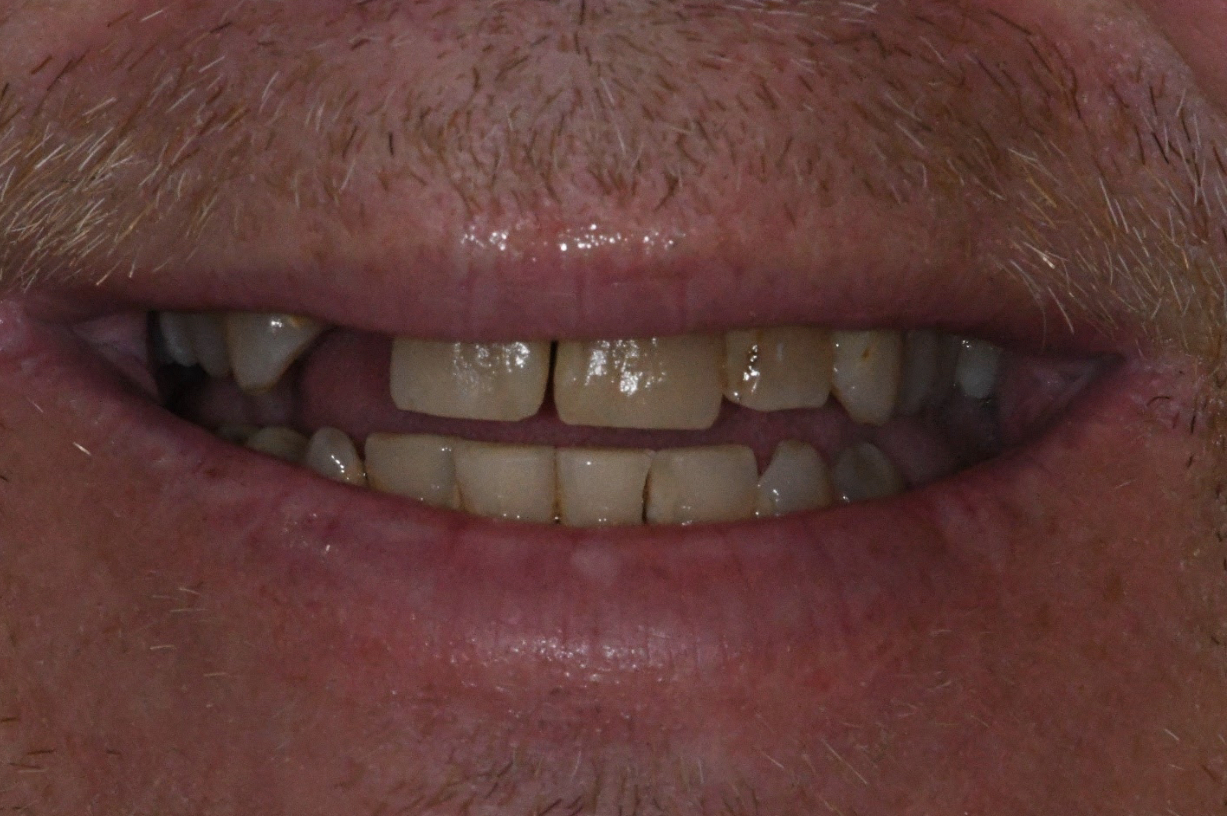 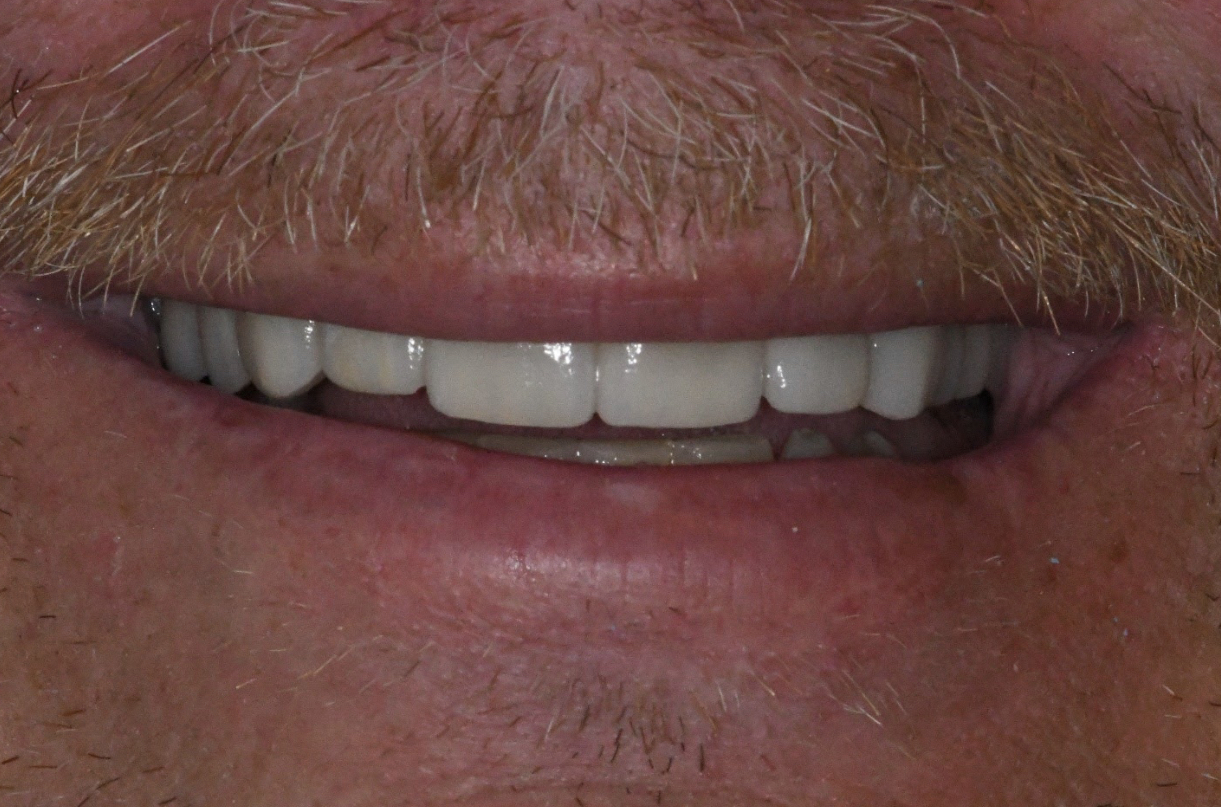 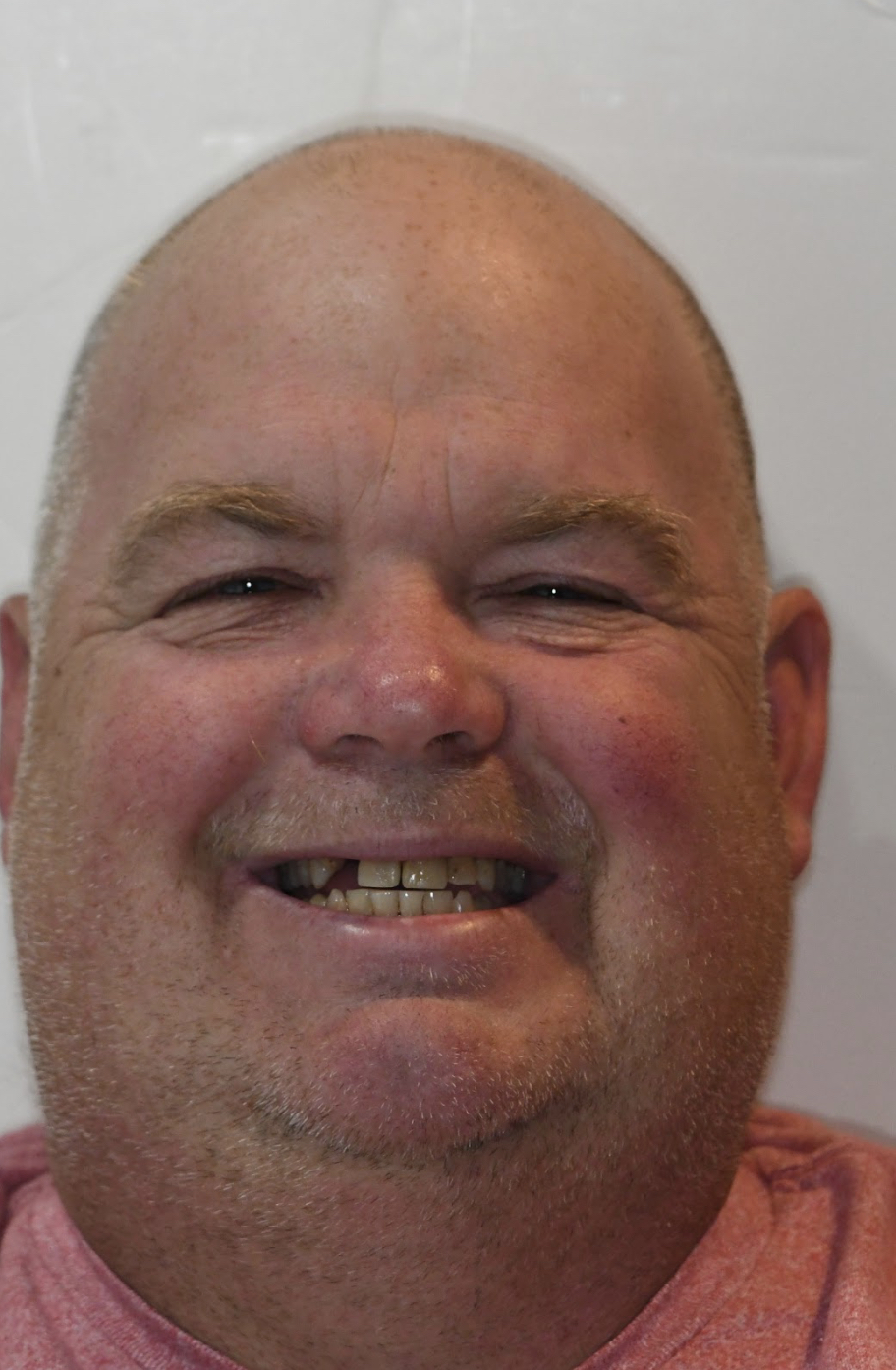 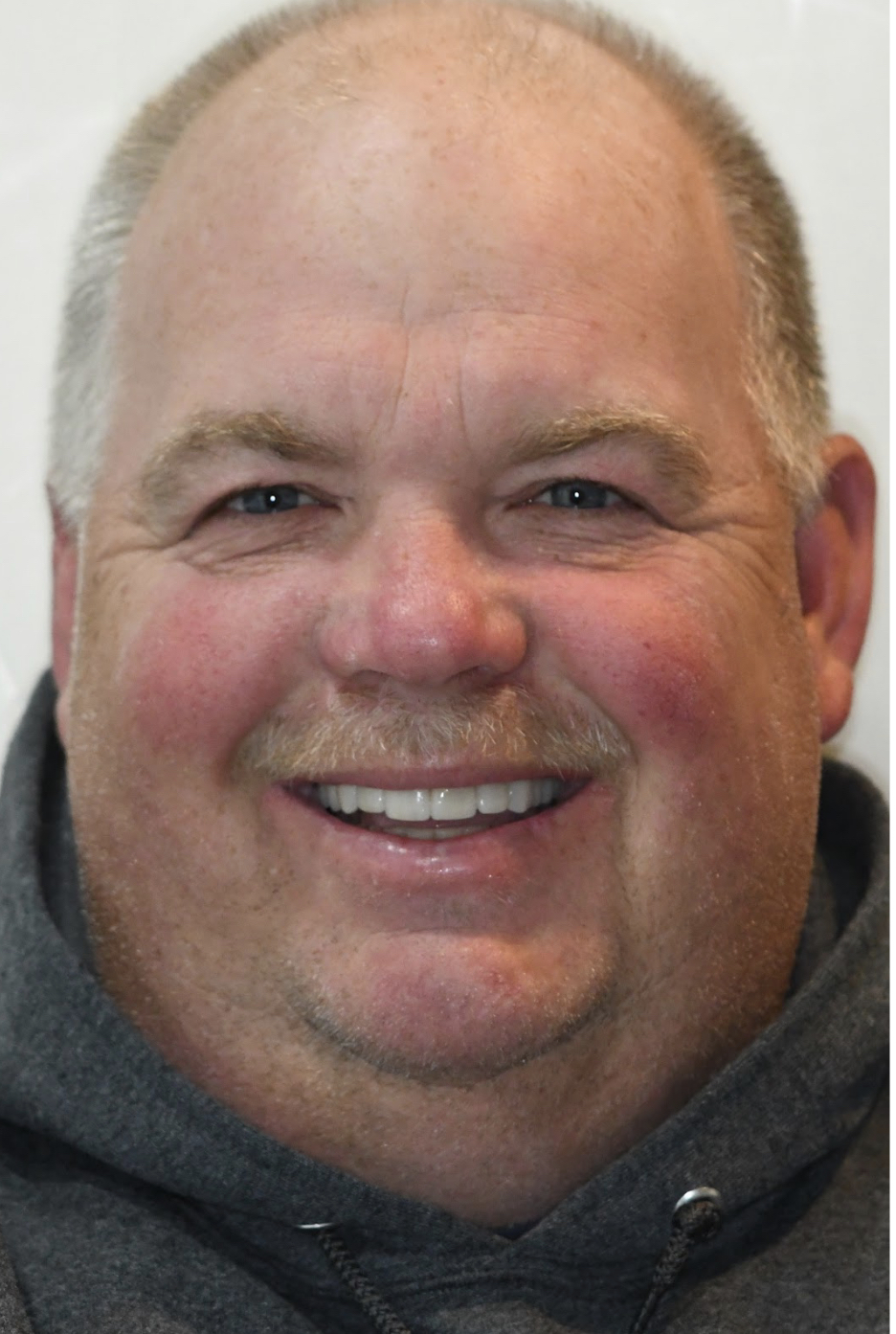 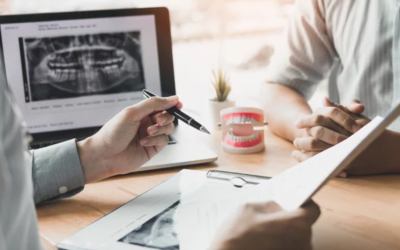 As technology in dentistry continues to advance, there are more options than ever available to utilize in treating a patient’s dental needs.

END_OF_DOCUMENT_TOKEN_TO_BE_REPLACED 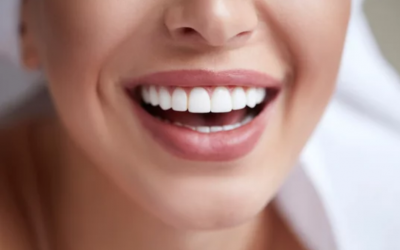 Influencing the Success of Ceramic Restorations

Ceramic restorations are among the most readily used treatments for improving the esthetics of anterior and posterior teeth.  These restorations have evolved over the years in terms of material selection and fabrication techniques.  Even with these continued...

END_OF_DOCUMENT_TOKEN_TO_BE_REPLACED 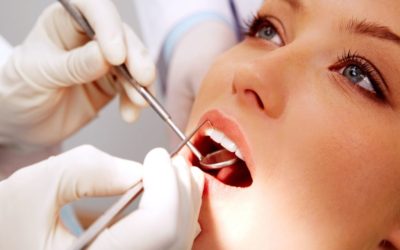 Dentistry: The Fountain of Youth

A healthy diet, plenty of rest, a good skincare routine, and exercise all play an important part in staying vibrant and youthful. A big secret that is often overlooked in the fight to stay young, however, lies in a person’s teeth. A smile is one of the first things...